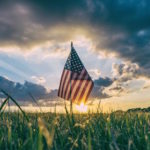 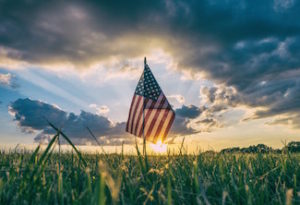 image by Aaron Burden on Unsplash

I grew up in the golden years
when WWII was finally past.
A grateful country shed her fears
as fighting men came home at last.

We stood united, bold and brave,
inspired by freedoms we could name,
allied with nations we helped save,
and fair to those we overcame.

We worked together for one goal
Americans held fervently:
a union that was strong and whole,
a nation that was proud and free.

The means were often in dispute,
but one great end was crystal clear:
to crown with good and brotherhood
a land we all chose to revere.

We took a little, gave a little,
compromised to get things done.
Sometimes we met right in the middle
to ensure the country won.

Hard work was valued and rewarded;
independence was the prize.
Industry was praised, not thwarted.
All our hopes were on the rise.

Values laid a sure foundation.
Cynicism held its tongue.
Firm resolve, not resignation,
was the gift we gave our young.

A land of dreamers? Yes, indeed.
Idealists? Sure, we aimed high.
Believing that we could succeed,
the limit was our starry sky.

But hope gave way to animus.
When did our vision lose its reach?
The answer lies in each of us.
Our children practice what we preach.

The love of country starts at home.
It’s learned upon a parent’s knee.
No patriot is born alone.
Beginnings frame our destiny.

Who trades belief for bitterness?
This nation thrives when men are true.
Commitment is not hit or miss.
The dream is ours. We’ll see it through.

Walk tall on Independence Day.
Our liberty was bravely earned.
The path is clear. Let no one say
too many bridges have been burned.

Our land remains our land, and free.
Problems abound, but we are strong.
In order to claim victory,
we must believe. We must belong.

Respect and honor differences,
then focus on the things we share.
Negotiation is the key.
We get it right when we fight fair.

Fairness requires an open mind,
a listening ear, a lack of guile.
Why not leave enmity behind
to serve our nation with a smile?

And as the fireworks light the stars,
give thanks to those who went before.
Their legacy, uniquely ours,
demands the best in us … and more.

Be brave; be loyal, and be true.
Ring bells; sing anthems; blow a horn.
Embrace this land of ours and prove
that patriot dreams can still be born.

A Love Note to America…
and Her People