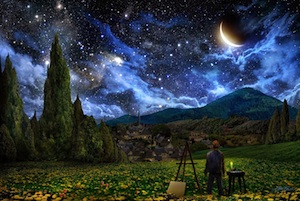 In the mind or in the meadow,
we must find our starry night.
From the green hills or the ghetto,
we are moved to set things right.

Through the bars that block our windows,
past the cells our souls create,
we contest the way the wind blows,
brushing off the hands of fate.

Man is weak and prone to stumble.
Let the daylight count the cost.
But the moon will never tumble,
and the stars shall not be lost.

Sailing on a ship of crystal
or a van Gogh-ing to hell,
wrap that starry night around you
and believe that all is well.

Inspiration for Ruiz’s painting came from a work by Vincent Van Gogh, The Starry Night, created in June of 1989. It is based on a view from the east window of his room at Saint-Remy-de-Provence, a mental institution. “Through the iron-barred window,” he wrote to his brother, “I can see an enclosed square of wheat…above which, in the morning, I watch the sun rise in all its glory.” In the end, however, Van Gogh opted for what he called a “night study” of the scene, one which he deemed a failure. “Once again,” he wrote his friend Emile Bernard, “I have allowed myself to be led astray into reaching for stars that are too big.” Of course, time has proven Mr Van Gogh to be considerably more successful in his efforts than he imagined. (Perhaps the stars are never too big for our reaching.) 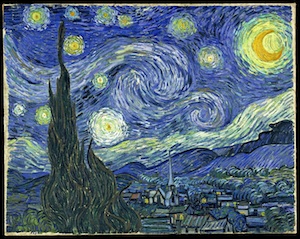 Finding Brillig:
AKA Rocking the Jabberwock