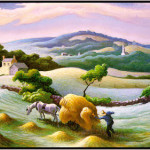 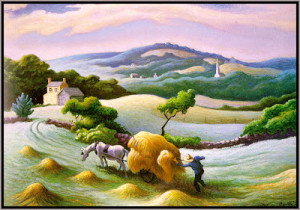 From break of dawn till setting sun,
he worked until the work was done.
No perks, no flex-time, no review–
just midday sun and morning dew.

He broke the ground and planted deep,
sowed only seeds he chose to reap,
petitioned God to fill his plate,
and thanked Him for the food he ate.
With plow and pasture as world view,
his was a simple time–and true.
•••
Now seeds of change are ours to reap,
(a time to lose, a time to weep)
a time to mourn what time won’t keep–
the work-worn hands, the weathered face
(the sense of self, the sense of place)
the land, the innocence, the grace.

To every thing, there is a season…and a time to every purpose under the heaven.
Ecclesiastes 3:7

Not Yet a Bust