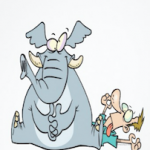 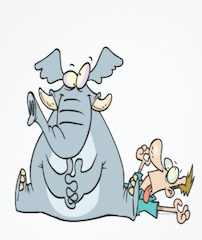 What is this creature on my chest?
Blue elephant has come to nest.
My lungs are smashed; my heart is crushed.
My whole, wide world in blue is brushed.

Not robin’s egg or ocean blue,
more like a mess of midnight goo.
And I’m surrounded by the stuff.
Blue bites! Big-time. Enough’s enough!!

It’s hard to breathe, harder to talk.
I locomote by belly-walk.
Yo, Dumbo. Get off, dude. You stink.
(Henceforth, my pachyderms lean pink…)

“Good morning, Eeyore,” said Pooh.
“Good morning, Pooh Bear,” said Eeyore gloomily.
“If it is a good morning, which I doubt,” said he.
“Why, what’s the matter?”
“Nothing, Pooh Bear, nothing.
We can’t all, and some of us don’t. That’s all there is to it.”
“Can’t all what?” said Pooh, rubbing his nose.
“Gaiety. Song-and-dance. Here we go round the mulberry bush.”
-Winnie the Pooh

Not Every Turkey Gobbles