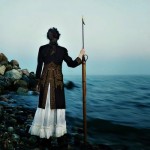 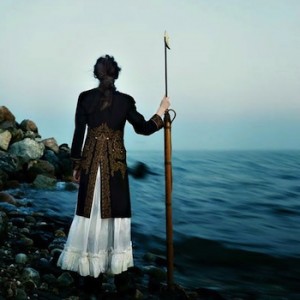 Away and away to the black-bottomed sea
sailed her man on a whim and a wave.
“No creature above or below escapes me!”
was the promise his blushing bride gave.

Harpoon in hand, she stood vigil by day
and by night cast a net in her dreams.
Her veil was the mist, trimmed in fine ocean spray,
and her tears ran in saltwater streams.

As the gifted photographer who created the subject image (above), Caroline Knopf, states, “The ideas behind an image originate with a piece of clothing, a painting, some glimpse that captures my imagination and the pictures unfold in my mind like pages of a book.” This image of a woman looking out to sea certainly stirs the imagination and suggests many an enchanting tale. My poem is an attempt to capture one of them.

“The fishermen know that the sea is dangerous and the storm terrible, but they have never found these dangers sufficient reason for remaining ashore.”
– Vincent Van Gogh

“It is not that life ashore is distasteful to me. But life at sea is better.”
– Sir Francis Drake

“The sea, once it casts its spell, holds one in its net of wonder forever.”
– Jacques Yves Cousteau

“His eyes were the same color as the sea in a postcard someone sends you when they love you, but not enough to stay. –Warsan Shire

“Those who live by the sea can hardly form a single thought of which the sea would not be part.” – Hermann Broch

“There is nothing more enticing, disenchanting, and enslaving than the life at sea.” – Joseph Conrad