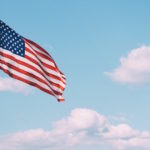 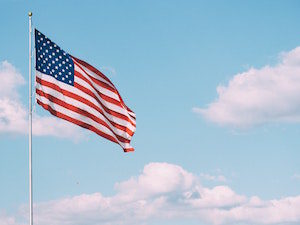 image by Aaron Burden on Unsplash

We reverenced the flag when I was a young girl…
proud and strong we stood, hand over heart.
Deep emotions were raised as we saw it unfurl;
our allegiance was pledged from the start.

We were taught by our parents’ example…
their knowledge that freedom was fragile at best.
They had seen evil threaten the world and
defeated it soundly when put to the test.

Liberty was an essence that sang in their blood
for the blood of brave countrymen slain,
and the flag was a symbol of all we had lost
and a tribute to all we retained.

From ocean to ocean, our voices were raised
in an anthem proclaiming our worth.
As heroes had given their all, so would we,
in upholding the land of our birth.

We honored the flag and the nation it stood for.
We sang, and we pledged, and we stood.
We were grateful enough to hold sacred a symbol
defining our country as good.

Today things are changing. So many young people
just watch the parade passing by.
They stay in their seats or stand carelessly slouched,
quite unstirred by our flag in the sky.

Our patriot songs are less known and less sung,
our allegiance less fervently vowed.
Cold winds of dissension blow harder each day,
and the roar of contention is loud.

If united we stand and divided we fall,
then survival demands common ground.
Our roots lie in legacies, planted by love
of the country our forefathers found.

True freedom is more than the right to dissent;
it’s respect for the things we can share.
When the patriot dream seems elusive, our flag
carries hope that the dream is still there.

Those broad stripes and bright stars are reminders.
Embrace them. They help us to know who we are.
In peace or in conflict, they fly on a standard,
and we must keep raising the bar.

On Memorial Day, as we reverence our dead
and remember brave souls, let’s be clear:
We live in a land that demands our devotion
and honor each day of the year.

A nation is fed by the people it nurtures,
and all of us drink the same cup.
Our stories are told in the symbols we share.
May every heart treasure them up.

What Is Memorial Day?