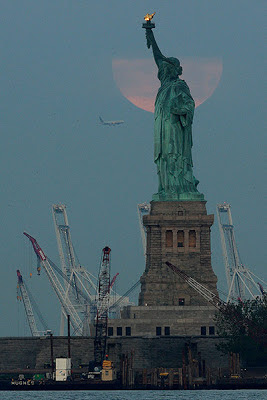 They came: the tired, the poor, the yearning masses,
the flood of people reaching for one moon––
sharing a dream that lived and died in snatches,
mercurial as air in a balloon––
inflating, rising, dipping, begging patches,
blown-up and bursting with sweet freedom’s tune.

Their voices soared across the purpled mountains;
their footsteps turned and tilled the fertile plains.
They slaked their thirst in rivers, sipped from fountains,
sucked liberty into their seeping veins;
laid down new roots, too numerous to count them,
scattered upon the wind the seeds of change.

Our Lady greeted all, and still she stands,
holds torch aloft against a fading sky,
whispers to suitors born in distant lands
promises kept or broken on a sigh.
Hope is the light that flickers in her hands,
as fragile, strong, and free as you and I.

A Love Note to America…
and Her People

What Is Memorial Day?