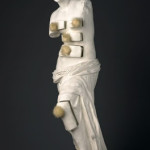 Greet the One all creation adores,
crowned the goad-ess of weddings and wars.
She is immortalized
as a feast for men’s eyes,
but she’ll not let them get in her drawers!

This sculpture by Dali has always intrigued me, and I couldn’t resist having a little fun with it. Having said that, I should also add that Dali had serious intent in this work, as evidenced by his words about Venus de Milo with Drawers:  “The only difference between the immortal Greece and contemporary times is Sigmund Freud, who discovered that the human body, purely platonic at the Greece epoch, nowadays is full of secret drawers that only the psychoanalysis is capable to open.”

The Go-To-Girl Got Up and Went