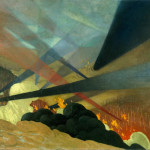 then and now, war is the same
guts and glory, brawn and blame
rage, remorse, and alibis
searing truth and crushing lies

“History teaches us that men and nations behave wisely once they have exhausted all other alternatives.” – Abba Eban

“One is left with the horrible feeling now that war settles nothing; that to win a war is as disastrous as to lose one.” Agatha Christie

“O peace! how many wars were waged in thy name.” – Alexander Pope

I am not saying here that war is never necessary. Evil exists in the world, and sometimes, we will have to fight it. But we need to be sure that we, ourselves, are not the very evil we seek to eradicate. And that is almost never an easy call.