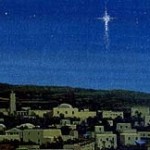 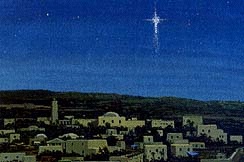 Tonight I walk beneath a gentle sky
where stars are warm and whisper, “Peace, be still.”
The silence beckons softly, as the moon
shines clear and bright upon a distant hill.

My eyes look up, and in the glow I see
reflections of another gentle night,
when o’er the quiet hills of Bethlehem,
one star proclaimed the everlasting light.

The Everlasting Light, Emmanuel…
A Child was born, by prophecy foretold.
A humble cave was shelter to a King
who lived and died to make our hearts as gold.

A mother who had never known a man…
A father who received her, and believed.
Together, they would walk a lonely road,
in service to the Babe that was conceived.

Though reverence was their due, it went unpaid.
Few people understood what was in store.
Then Caesar, who had never understood,
levied a grievous tax upon the poor.

So Joseph went with Mary to be taxed,
the glory of their calling still unknown.
And willingly, though she was great with child,
she bore the weight for all of us, alone.

She carried every hope and every dream
across a barren land and then pushed on
through pain and sorrow, Joseph at her side,
to Bethlehem, until her strength was gone.

The time was nigh, the Baby would be born.
Where would the weary travelers find their rest?
Inside the city, none would take them in,
and so a lowly stable was their nest.

A child was born of Mary, as foretold,
and in her loving arms He gently lay.
The Hope of all the world had come at last…
a baby, cradled in the new-mown hay.

The Son of Mary and the Son of God–
a newborn King descended from on high.
For lo, an angel voice proclaimed the birth
to shepherds watching o’er their flocks nearby.

And they were sore afraid, but they did hear
glad tidings, for the promise had been kept.
Their eyes beheld a star, a wondrous star…
above that sacred place where Jesus slept.

A host of angels filled the evening sky
rejoicing, shouting praises through the air.
As time stood still, the earth and heavens were joined…
for you and I, and all of us, were there.

The Wise Men brought Him gifts of purest gold;
rich frankincense and myrrh were in their hands.
They sought the newborn King to honor Him,
making their way in haste from distant lands.

Deliverance was the promise He fulfilled
when He descended from His throne above,
but He did not do battle with a sword.
Our Lord came bearing gifts of peace and love.